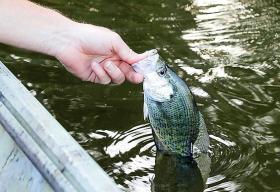 A dedicated and experienced crappie angler will tell you that summer, fall and winter are also crappie fishing time. True. But in March when the water temperature slowly rises, there is crappie action all over the state.

Lake Chicot in the southeast corner may get crappie limits coming in early, but just a few days later the action will pick up on Lake Conway and Lake Dardanelle, and in just a few more days on Beaver Lake and Bull Shoals Lake.

To date, no one Arkansas lake has managed to earn and hang on to the title of Crappie Capital. In that vein, no one method, no single bait, no particular lure has emerged head and shoulders above all the rest for crappie successes.

But we do have the crappie specialists. Numerous crappie anglers only fish with jigs. Good numbers of fishermen believe live minnows are the thing to work with. And there are the legion of “try them all” practitioners, those who fish with minnows, jigs, small crank baits and little spinner lures — whatever will draw a bite from a crappie.

A brief survey of crappie catchers:

Minnows. For ages, these have been the crappie fishing standards. Minnows are small fish of several species, some of the carp family. In fairly recent times, the gray or silver minnows have been joined by the pink or red types. Some of the latter are termed rosy reds by fishermen and by bait sellers.

Crappie fishermen take care to keep their minnows alive and active. When minnows are sold, they often are in a plastic bag with some water and additional air injected into the bag before it is tied shut. When the weather warms, fishermen work to keep minnows cool, adding ice to the container or keeping minnows in a cooler until time to bait a hook.

Jigs. Most crappie jigs have two components — the head molded around the hook and the skirt. The head has a eyelet for tying the jig to the line. The skirt most often is either feather or plastic. Feather jigs are frequently called marabou jigs, with that name coming from a member of the stork family, Most jig feathers, though, are from turkeys which are in far greater supply than storks.

Colors are a prime factor for jig fishermen, and color applies both to the head and the skirt. You may hear a crappie chaser report that “they wanted red and yellow today.” The meaning is a jig painted red and fixed with a yellow skirt.

There is no magic color for skirts, but there are some more common hues — white, chartreuse, yellow, black. Not far behind are purple, red and combinations of colors. Then we have the additions to the colors — sparkle, metal flake and such.

Look at the jig box of many crappie fishermen, and you see a wide array of colors and types. Some plastic skirts may be straight, some may be curled on the end and some may have divided or split tails.

Lures. An Arkansas crappie veteran commented, “You can take a lot of good bass lures and shrink them down and get good crappie lures.” That’s understandable. Bass, meaning black bass, and crappie are cousins, both members of the sunfish family. Crappie have much smaller mouths, however, requiring smaller lures and hooks.

Live minnows, jigs and lures are used differently in the water.

With minnows, the basic strategy is to cast out and let sit still. The hooked minnow will move around and attract a fish’s attention.

With jigs, it is cast out, let fall, wait, lift slightly and let fall again. Anglers say that strikes by a crappie most often take place as the jigs is slowly falling in the water.

Lures, depending on type, may be cast out then retrieved — the crank baits — or cast and let fall — the spinner-type lures. Most anglers use slow retrieves.

A technique that may be used with any crappie bait — minnows, jigs or lures — is trolling. With one or more poles or rods in the water, the fisherman in a boat moves very slowly, propelled by a battery-powered trolling motor or with a short paddle worked in a figure-8 pattern. This is called sculling.

Joe Mosby is the retired news editor of the Arkansas Game and Fish Commission and Arkansas’ best known outdoor writer. His work is distributed by the Arkansas News Bureau in Little Rock. He can be reached by e-mail at jhmosby@cyberback.com.